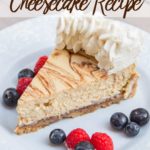 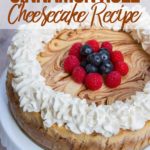 Luscious Vanilla Cheesecake is swirled with an ooey gooey cinnamon swirl topped with fresh whipped cream and berries this Cinnamon Roll Cheesecake is unforgettable perfect for your next party or special occasion!

Damn Daniel this cheesecake was good!! My sister tried some and told me I should start a cheesecake business, I'd really succeed she said. I cannot lie I think I would cuz damn Cheesecake is so good and I like to think I make a mean one!

This one comes as to no surprise of my late obsession, Cinnamon Roll. I was dreaming of a cinnamon roll esque cheesecake when I was roaming the aisles of the market as I usually do. And out popped Cinnamon Roll Oreos, well hello if that wasn't a sign to make a Cinnamon Roll Cheesecake I don't know what is!!

So I got to work. Crushed a whole container of Cinnamon Roll Oreos and melted some buttah into them. You could, of course, use regular Golden Oreos and add some ground cinnamon.

I beat the cream cheese until light and fluffy then added brown sugar, not granulated sugar, because Cinnamon Rolls and brown sugar are synonymous. I had never made a brown sugar cheesecake, it worked- phew!

Then I added my favorite things to make a Fabulous Cheesecake- Greek Yogurt ( or Sour Cream but I am trying to watch my figure 😉 ) and Heavy Cream ( obviously not watching my figure that well) then come lots of Pure Vanilla Extract and Eggs.

Tips for making the best Cheesecake

Popped the Cinnamon Roll Cheesecake in the oven and let it bake to perfection. When making Cheesecake I ALWAYS follow these steps:

★ Please let me know if you make this recipe by leaving a star rating and comment below!

Luscious Vanilla Cheesecake is swirled with an ooey gooey cinnamon swirl topped with fresh whipped cream and berries this Cinnamon Roll Cheesecake is unforgettable perfect for your next party or special occasion! 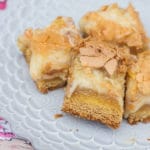 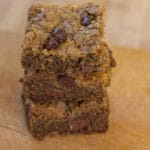 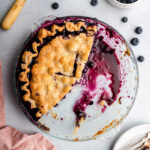 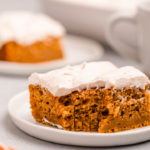 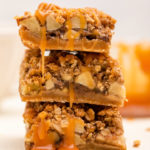 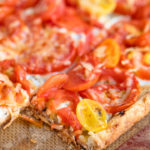