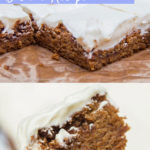 Buttery, rich and chewy blondies are swirled with cinnamon sugar baked to a golden brown and topped with a luscious cream cheese frosting. You will love this Cinnamon Roll Blondies recipe!

Cinnamon rolls, one of my true loves. And I actually enjoy making them from scratch. I've got a great recipe for making them the night before and baking first thing in the morning. Lemme tell you, unreal. There is NO comparison to store-bought vs homemade cinnamon rolls. It's worth it. And not hard at all. Enough about them.

On to these Cinnamon Roll Blondies...
So I love cream cheese frosting and love cinnamon and I was craving an easy blondie/ bar so it was only natural to do this. I am sure I am not the first one to make a cinnamon roll blondie but I am biased to say this was a fabulous recipe.

I added cinnamon in the blondie base and then made a butter/brown sugar/ cinnamon mixture and swirled it throughout before I baked.

I literally could dive into that frosting. Its the same one I use for my cinnamon rolls. I like it so much because you can taste the cream cheese, so often a cream cheese frosting is so sweet or buttery that the star of the show doesn't shine. Well lemme tell you this time cream cheese shines!

Finding the pockets of cinnamon sugar was delightful, a chewy cinnamon blondie topped with cream cheese frosting. Wow. Speechless. I prefer the bars chilled but to each their own!

Buttery, rich and chewy blondies are swirled with cinnamon sugar baked to a golden brown and topped with a luscious cream cheese frosting